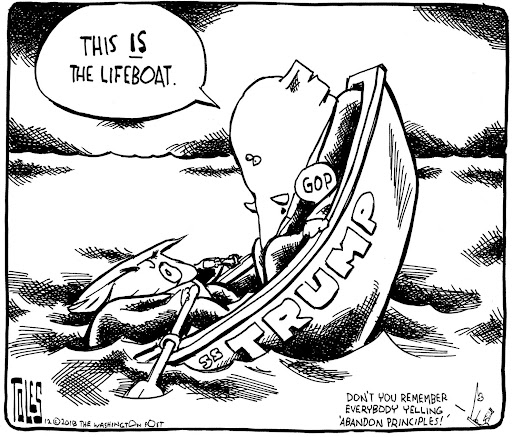 Toles, Tom. "Rub a dub dub, Republicans in a sinking tub." The Washington Post, 9 December 2018, www.washingtonpost.com/opinions/2018/12/09/rub-dub-dub-republicans-sinking-tub/ . When seeking a political cartoon to analyze today, I turned to Tom Toles, a Washington Post cartoonist whose style I particularly enjoy. Toles, being a cartoonist, draws in a cartoonish manner. His landscapes are often abstract, as we see above; his characters are simple; their features are exaggerated. I've long enjoyed Toles' drawing style—particularly the way in which he depicts President Trump, which I find hilarious. Toles depicts him as a short, perpetually angry man, with beady eyes and bushy, angled eyebrows. The mouth, which resembles a donut, is my favorite part; it finishes off the caricature. The President is one of Toles' most common characters, alongside such personified ideas as the GOP elephant, who appears as a stylized, humanoid elephant in a suit. Here we see the
Post a Comment
Read more

November 27, 2018
(For context, in Lit today my class reviewed the practice IBLL Paper 1 comparative pieces we wrote last week. This is a short reflection on the process of writing and reviewing.) I think my Paper 1 leaves much to be desired. When writing it I was not sure how a Paper 1 was meant to look. I grasped the basic concept of comparison but spent my time making comparative lists instead of comparative paragraphs; I had no introduction or conclusion. The reviewing process, during which we looked at two online examples of Paper 1 pieces, was extremely helpful with regards to my comprehension of the assignment. Based on the format of the examples, my plan for writing the next Paper 1 is to (1) observe 2-3 common themes and (2) make an outline—including an introduction, the appropriate number of paragraphs for the number of themes I plan to discuss, and a conclusion. The next practice/actual Paper 1 I compose will be much longer and more thorough than this one.
Post a Comment
Read more

#5: Get Your Act Together

November 17, 2018
Take a look at this article. In Lit this week we discussed the sensationalism of its title. Here I will investigate the article itself. The title sums up the content fairly well: "Chávez's Opposition Gets Its Act Together in Venezuela." The narrative concerns the fallout of a 2010 Venezuelan election under then-President Hugo Chavez. My favorite part about this article is that it seems to hate everyone it talks about. Though the article appears to support the opposition, it is clear that the author doesn't think very highly of its efforts. "At last!" the author seems to say, "Chavez's opposition is FINALLY getting its act together! (Took 'em long enough!)" Even better, the article begins: Ever since he was first elected 12 years ago, Venezuelan President Hugo Chavez has been fortunate to face what is the western hemisphere's most incompetent political opposition. His opponents' most boneheaded move came in 2005, when they r
Post a Comment
Read more

October 12, 2018
Take a look at these GAP ads from 2016. These ads are similar in format; two children (white, blond, blue-eyed children) in a fairly nondescript room accompanied by fairly nondescript text. One is a boy and one is a girl. The boy is very hopefully and positively labelled "The Little Scholar," while the girl is appropriately referred to as "The Social Butterfly." Perfectly normal. Okay, hold on. Considered alone, each ad seems reasonable. It aims for a demographic and reaches it. Together, however, the fact that the boy is the smart, manly future genius and the girl is already supposed to be preoccupied with fashion and popularity is obviously problematic. "Hey, boys! You will all be smart, go to school, and contribute greatly to society! Girls, you just focus on looking good." This campaign subscribes to and perpetuates gender stereotypes, and makes me wonder if GAP's marketing department isn't entirely male. It's disappointing and dishea
Post a Comment
Read more

October 01, 2018
Happiness is a chemical reaction. That much is clear. It's harder to pin down what causes the chemical reaction in the first place. Everybody has a different list. Personally, I'm happiest when my homework is done and my medications are working. At the same time, I hesitate to call antidepressants a source of happiness. Generally they do nothing but make actual sources more effective. Key word: generally. Sometimes antidepressants work so well that they are the cause, and sometimes they don't work at all. I'm also unsure of whether to call "lack of stress" a source of happiness. It's certainly satisfying to have nothing to do. I just think that saying "lack of stress" is like saying "lack of depression" or "lack of a gaping wound in one's chest." Of course it's nice to not be stressed or depressed or bleeding to death, but does it make us happy? Maybe it does. Maybe our default state is happiness, but there is so
Post a Comment
Read more

#2: The Greatest Commercial of All Time 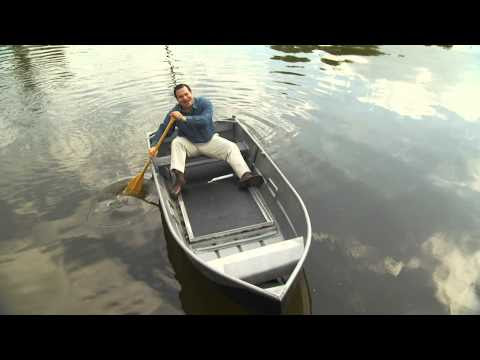 This is the greatest commercial of all time. "Hi, Phil Swift here with Flex Seal!" I'm serious. No other commercial has embedded itself so thoroughly in our collective psyche - from my perspective as a young person on the internet, at least. It has inspired hundreds of parodies, thousands of posts, and hundreds of thousands of comments. Phil Swift, always excited and eternally grinning, is a veritable deity of internet memes. His immortal words, " That's a lot of damage! " (from a different Flex Seal commercial ), are arguably better known than the product itself. Phil Swift is the CEO and spokesman of Flex Seal Products, which produces the eponymous Flex Seal, the product Phil describes as "liquid rubber in a can!" Backed by optimistic electronic music, this two-minute 2015 infomercial features him fixing pots, sealing leaks, and trying and failing to destroy Flex Seal with a blowtorch and liquid nitrogen. To top it all off, Phil repl
Post a Comment
Read more
More posts